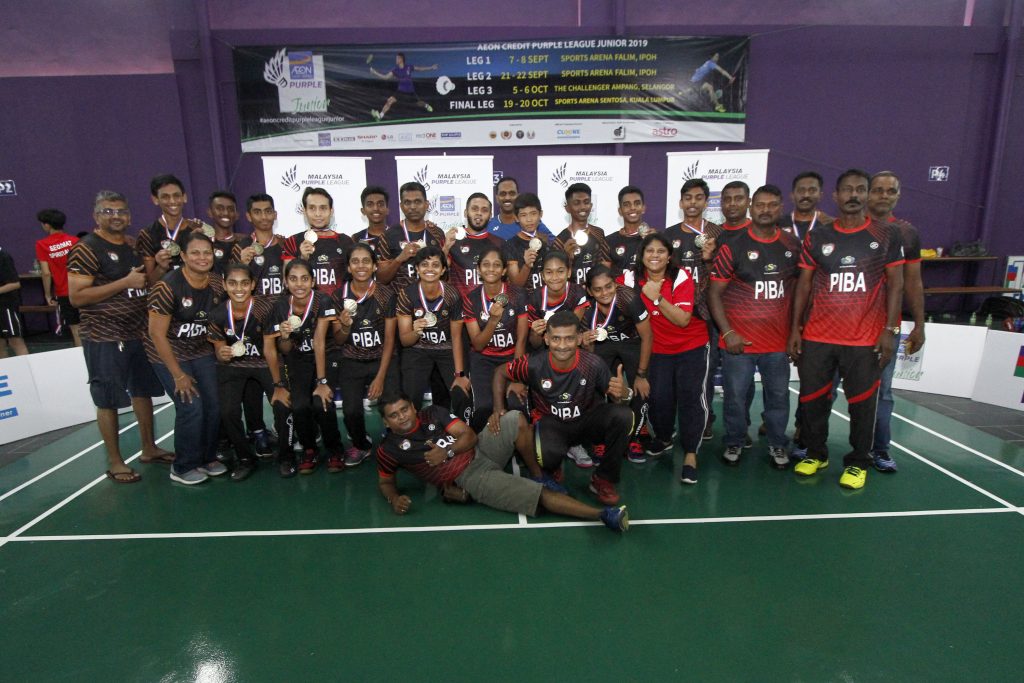 IPOH (8 SEPTEMBER 2019): Bagan Badminton Club (Bagan BC) ruled the roost in the inaugural Division 3 category of the AEON Credit Purple League Junior (ACPLJ) 2019 when they completed a clean sweep, winning all of the matches at the culmination of the opening leg today.

Kicking off the action at Sports Arena Falim, Ipoh this weekend, Bagan BC was sitting in second among the six team mini-league yesterday after winning three of their matches against Cheras TP BC, Labuan DSBC and Bayan Lepas BC.

They continued their great run today, winning against Segamat Spiritual BC and Seremban City BC to seal the deal, emerging champions thus sealing an automatic place in Division 2 for next season.

Closest challengers, Cheras TP BC narrowly missed out on promotion as they finished as runners up while overnight leader, Segamat Spiritual BC went home in third.

For their efforts, Bagan BC brought home a winner’s purse of RM1,500 while Cheras TP BC went home with RM1,000 while Segamat Spiritual BC had to be satisfied with RM800.

Head coach Alif Razlan, who has been with Bagan BC for eight years, attributed the victory to the arrival of coach, Janu Saputra from Indonesia, five years ago.

“Janu joined the team five years ago and he had an immediate impact, sharpening the player’s skill and improving their stamina.

“For this tournament, we had organized a centralized training session for two months at PIBA (Penang Indian Badminton Association), where most of the players are based.

The ACPLJ 2019 will take a break next weekend due to the Malaysia Day celebrations and will return on the 21-22 September at the same venue with the opening leg of the Division 2 and 1 category.

This season’s second tier will feature Ayer Itam BC, Tebrau City BC, PGBC, Desa Petaling BC, Serdang BC, Klang Rising BC, Ipoh BC and Damansara BC.

The main event, the Division 1 category will see Bukit Cheras back to defend their title against the usual suspects like Ampang Jaya BC, Petaling BC, Rawang BC alongside newly promoted Amanjaya BC and Kuantan Synergy BC.

The second leg of the Division 1 and 2 category will continue on the 5th and 6th October at The Challenger Sports Centre, Ampang and the champions will be decided during the final leg on 19th and 20th October at Sports Arena Sentosa.

AEON Credit (M) Berhad (“AEON Credit” or the “Company”) was  incorporated on 6 December 1996 and was converted into a public limited company on 9 February 2007 and listed on the Main Market at Bursa Malaysia Securities Berhad on 12 December 2007. AEON Credit commenced operations in 1997 by providing Easy Payment schemes for purchase of consumer durables through appointed retail merchants and chain stores.