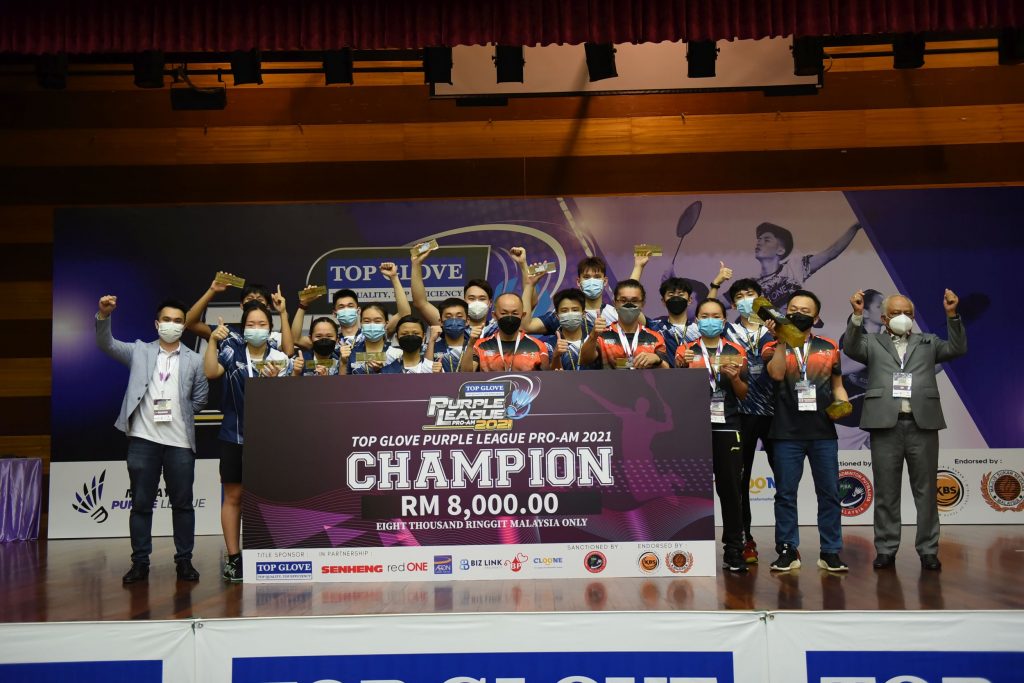 The Southern club side were in smashing form when they brushed aside fancied Butterworth Badminton Club 9-1 in the final.

Heavyweights Butterworth BC failed to live up to their top billing as Bandar Maharani BC made a clean sweep winning all three of their games.

Butterworth BC’s fight was all over in the third game when Bandar Maharani BC’s wonder kid Dania Sofea cruised past Isabel Liau in straight sets (11-8, 11-6, 11-10) in the women’s singles hence helping her team bring home the tournament prize money of RM 8,000.

The badminton prodigy from Johor was over the moon with her win. She said “I would like to thank Bandar Maharani BC for giving me the opportunity to participate in this prestigious tournament. This victory has raised my spirit and I promise to train vigorously and represent our nation one day.”

Bandar Maharani BC’s team manager Eric Chan commended the young talent for her efforts and said “I would like to take this opportunity to thank the Malaysia Purple League for organizing this tournament despite the ongoing Covid 19 pandemic. Dania Sofea has been exceptional for our team throughout the tournament as she has contributed the most points for us.”

Malaysia Purple League (MPL)’s Chief Operating Officer (COO), Ho Khek Mong who was present at the venue was thrilled to watch the young talents in action and congratulated the finalists. He said, “I would like to thank all the players for giving their best in this tournament.”

He added “throughout this tournament, we have seen some of the best young shuttlers in our country displaying signs of maturity well beyond their age. I have confidence that they will go far in their sporting career.”

He also thanked the main sponsors of the competition. He said, “We appreciate the faith of our sponsors Top Glove and for their continued support to organize the Pro-Am tournament this year”.

As the TGPLPA draws its curtains today, badminton fans should not fret. The Aeon Credit Purple League Junior 21/22 (ACPLPJ) will kickstart on Jan 8-9 next year in Malacca, followed by the second leg in Kampar from Jan 15-16, the third leg in Cheras from Jan 22-23 and the Grand Finale from Feb 19-20. The venue for the final stage has yet to be confirmed.

Bandar Maharani BC vs Butterworth BC (9-1)