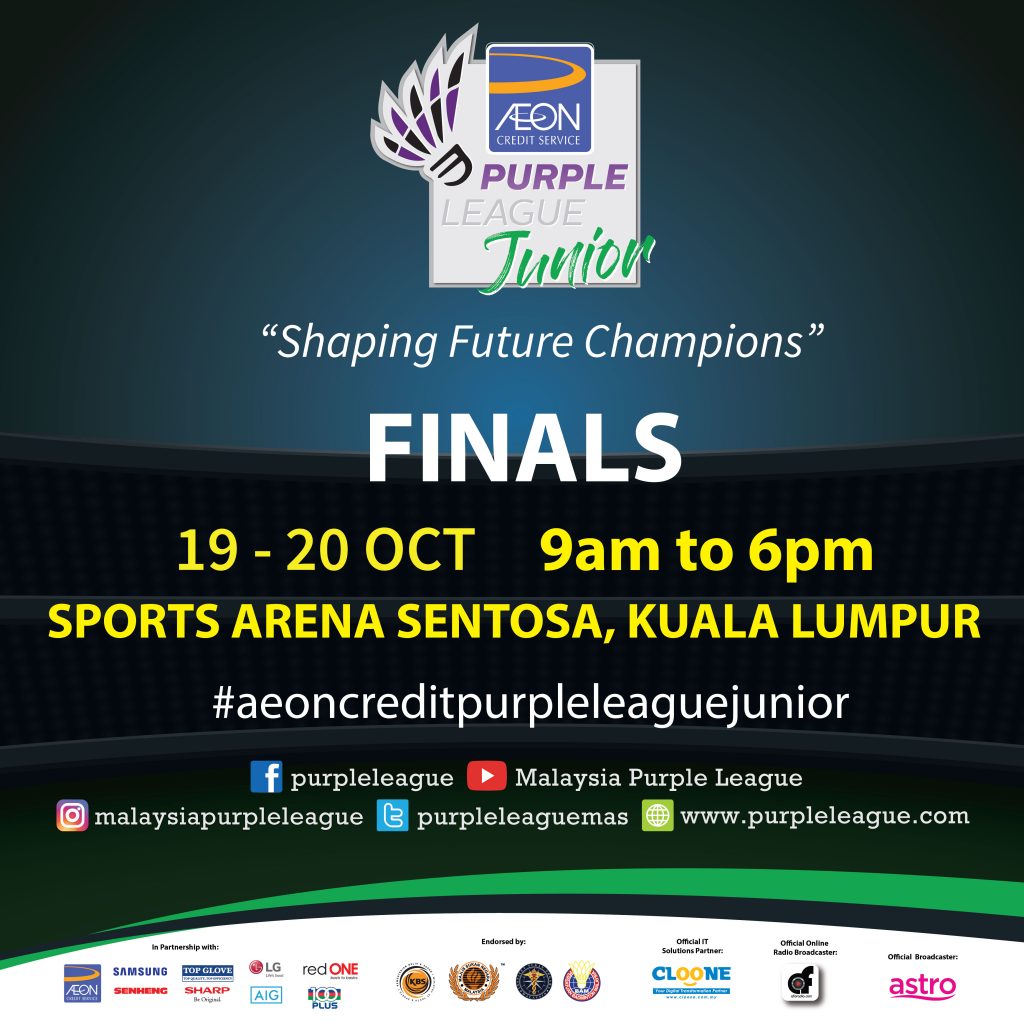 KUALA LUMPUR (16 OCTOBER): Kuantan Synergy Badminton Club (KSBC) are on a roll in the AEON Credit Purple League Junior (ACPLJ) 2019 but nonetheless they realize that nothing is won until the final shot is played.

Entering the finale this weekend, KSBC lead the standings after two rounds with a 100% record with six wins and are poised to win their maiden Division 1 title just a year after their promotion from Division 2.

But looking at last year’s finale, they would be wise to heed the old adage ‘do not count your chickens before they hatched’ as anything can happen on the final day.

The scenario going into this year’s final leg has KSBC leading the standings with 1051 – 905 points followed by Bandar Maharani (BMBC) who have also maintained their unbeaten record collecting (905 – 754) points.

The match between KSBC and BMBC looks like an intriguing encounter as it’s also a title decider with both teams in with an equal chance to be ACPLJ2019 champions at the end of the fourth leg this weekend.

Meanwhile, third-placed Kepong BC (KBC) are also harboring hopes of stealing the thunder from the favorites and themselves becoming champions but in order to so must ensure they win all their matches convincingly over the final two days of competition.

BMBC’s head coach Yap Kim Heng is confident his players have the heart to fight till the end and overcome KSBC and be crowned champions.

“For the final round this weekend, my players are prepared for their remaining matches. On paper, KSBC are the seeded team but we will try our best to defeat them,” said Kim Heng.

“All our players must turn up and play their respective roles as we cannot afford to lose any more points in the remaining three matches,” he added.

In Division 2, Ayer Itam BC (AIBC) remain unbeaten  after four matches but cannot take things for granted because Klang Rising BC (KRBC), Desa Petaling BC (DPBC) and Serdang BC (SBC) are all capable of making up ground and gain the automatic promotion slot for Division One next season.

Over the last fortnight, AIBC climbed to the top after beating PGBC and Serdang BC to collect (748 – 642) points with four matches remaining. The ACPLJ2019 reaches its climax at the end of the final leg this weekend (Oct 19th & 20th) at Sports Arena Sentosa.