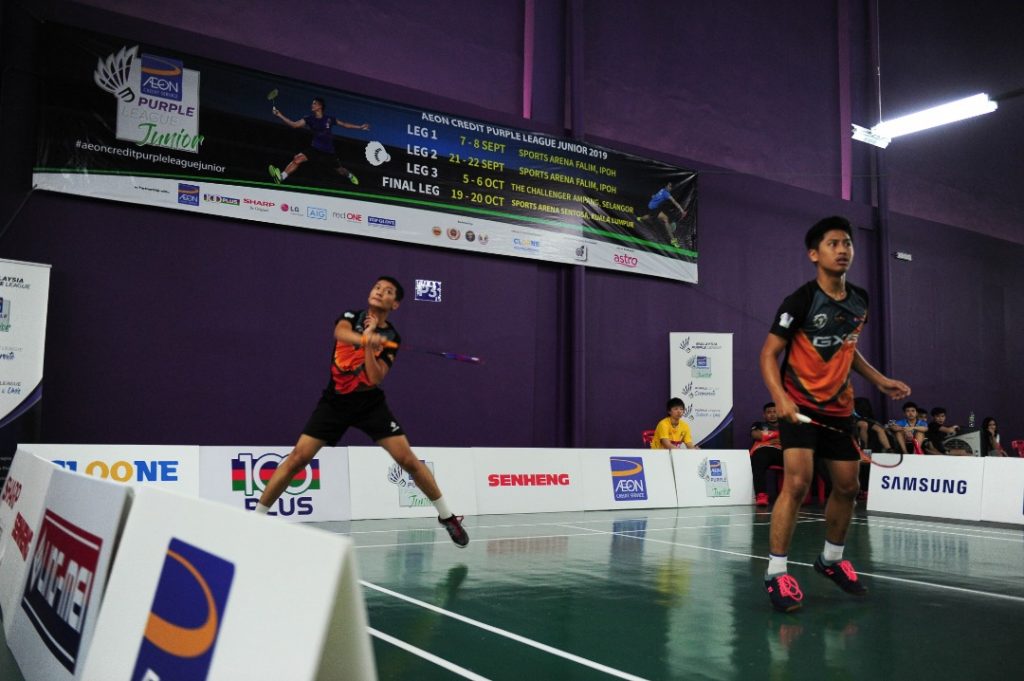 IPOH (22 SEPTEMBER 2019): After crowning its inaugural Division 3 champions two weeks ago, the AEON Credit Purple League Junior (ACPLJ2019) returned to Sports Arena Falim, Ipoh over the weekend with Division 1 & 2 teams taking to court for the start of their campaign.

Kuantan Synergy BC (KSBC) leads the Division 1 pack at the end of this weekend’s proceedings as they claimed their third straight victory of the season by overcoming last year’s runners-up, Ampang Jaya BC (AJBC) 13-6 earlier today.

After already recording two wins against Petaling BC (12-8) and Amanjaya BC (13-6) respectively yesterday, KSBC got off to a flyer with two successive 3-0 wins through Muhd Nurfirdaus Azman in the boys’ singles and their girls’ doubles pair from Chinese Taipei, Hsu Yin Hui-Sung Yi Hsuan.

AJBC then showed some signs of a resurgence when their mixed doubles pair, Ling Wei Jie-Odelia Wong Qiao Shi managed to overcome Eng Chun Yu-Siti Zulaikha 3-1 only for Kuantan’s Tu Chia Wei to all but seal the victory for the newly promoted side by defeating Ampang Jaya’s Ong Xin Yee 3-1 in the girls’ singles.

KSBC’s coach, Azman Amman said after his side’s victory, “On paper, we are not considered as contenders for the title but after the team’s display and team work throughout this leg, we believe we can challenge the more established teams in this division.”

“I am proud of my players and personally hope they can continue their fine performances for the upcoming ties and push for the title”, added an ecstatic Azman.

Kepong BC are hot on KSBC’s heels in the standings after notching up two wins throughout this leg followed by Bandar Maharani BC in third and Petaling BC in fourth. Last season’s winners Bukit Cheras BC find themselves in the bottom three ahead of only Cheras BC and Amanjaya BC after losing their opening two ties.

Meanwhile in Division 2, Ayer Itam BC leads the standings after the first two rounds of matches ahead of Klang Rising BC. After a resounding 15-3 win over Ipoh BC in their opening tie on Saturday, the current front-runners were pegged back to an entertaining 10-10 draw with Klang Rising BC on Sunday.

At the bottom of the table, Ipoh BC and PGBC struggled to begin their season on the front foot and will need to do some catching up in the upcoming legs after both teams stumbled to two consecutive losses in the opening leg of the campaign.

The ACPLJ2019 will take a break next weekend and will continue on 5th & 6th October at the Challenger Ampang before its conclusive leg at Sports Arena Sentosa over the weekend of 19th & 20th October 2019.