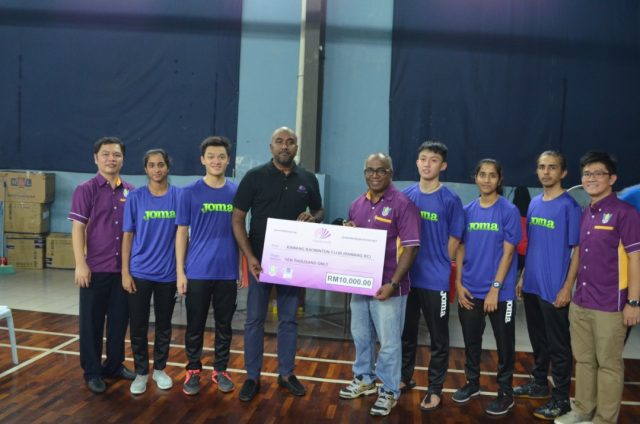 KUALA LUMPUR (11 SEPTEMBER 2019): Rawang Badminton Club, who remain in Division 1 of the Purple Junior League for a third season, will not “walk alone” in their relentless quest for honours in the Aeon Credit Purple League Junior (ACPLJ) 2019.

Chief Executive Officer (CEO) of Shekhinah PR, Mr Christopher Raj, sensing that Rawang BC have the potential to make good, unselfishly contributed RM10,000 to help fund the team’s search for success in the ACPLJ 2019 Division 1 this season. This is the second year running that Christopher has assisted the team, having contributed RM10,000 in their debut season last year.

In a show of commitment, Christopher presented the cheque for RM10,000 to Rawang BC team manager Jeyaseelan Anthony in a small but meaningful ceremony in Rawang recently.

Jeyaseelan will definitely be hoping for better things from Rawang BC after having finished a creditable fifth from nine competing teams in the PLJ 2018.

“For this season we have engaged the services of three foreign players. Maharani Sekar Batari and Achmad Ramadhan Ulul Azmi are both from Indonesia and from India we have signed Sathish Kumar Karunakaran,” Jeyaseelan disclosed.

“Maharani will fortify our girls’ department while Sathish and Achmad will give our boys’ team a big boost.

“We will also be strengthened with the services of Badminton Association of Malaysia’s (BAM) woman shuttler Gan Jing Err and two from BJSS (Bukit Jalil Sports School) Valeree Siow Zi Xuan (girls) and V. Poopathia who will join the boys,” he added.

The ACPLJ2019 got off in fine style last weekend when Bagan Badminton Club (Bagan BC) won the inaugural Division 3 title to earn promotion to Division 2 next season.

ACPLJ2019 will resume this weekend (21-22 Sept) after a one-week break due to the Malaysia Day celebrations with the opening leg of the Division 1 and 2 categories.

The main event, the Division 1 category will see Rawang BC in the mix with last season’s champions Bukit Cheras BC,  and usual suspects like Ampang Jaya BC, Petaling BC alongside just promoted Amanjaya BC and Kuantan Synergy BC.

This season’s second tier will feature Ayer Itam BC, Tebrau City BC, PGBC, Desa Petaling BC, Serdang BC, Klang Rising BC, Ipoh BC and Damansara BC.

The second legs of Division 1 and 2 will be played on October 5-6 at the Challenger Sports Centre, Ampang while the champions will be decided in the final leg on October 19-20 at Sports Arena Sentosa. 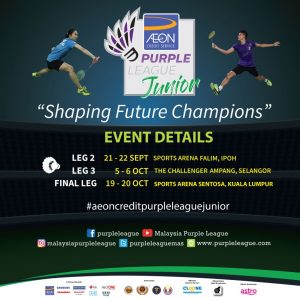 Sourced from: The Independent